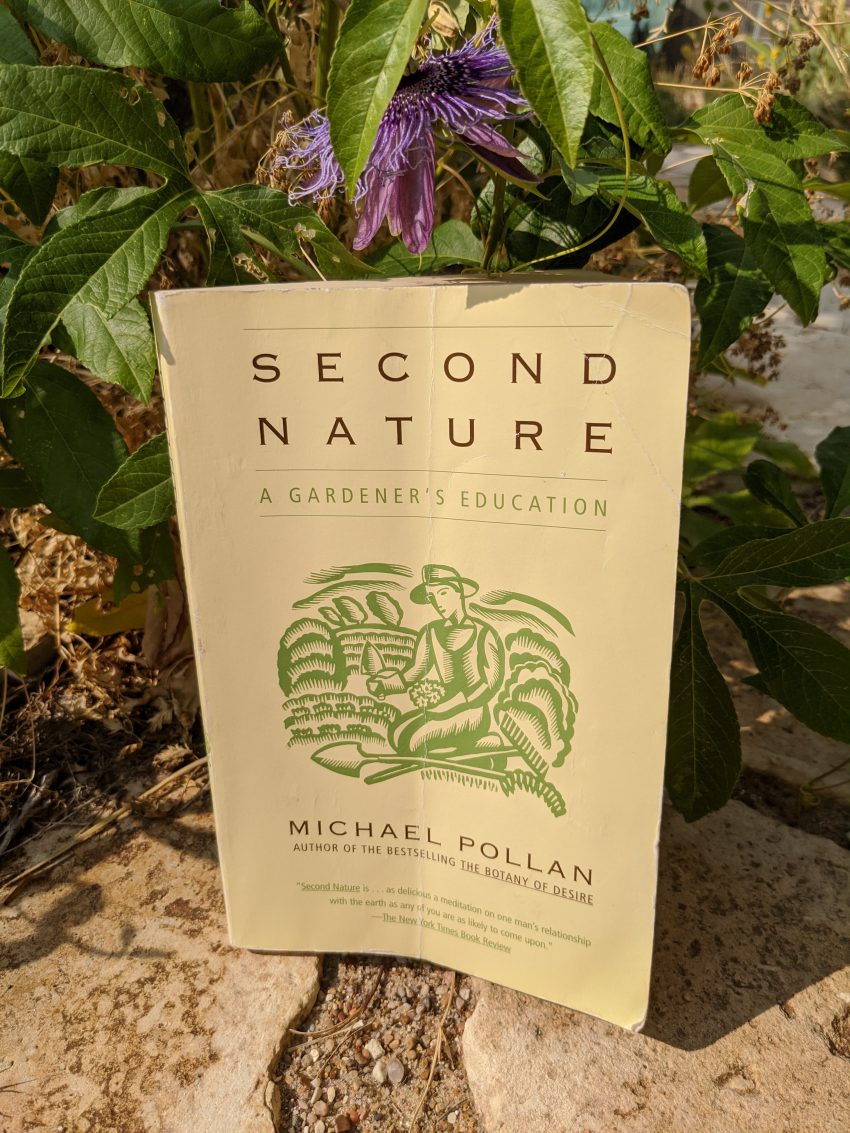 Each year as the days get shorter and the nights longer, I seem to spend more time reading than being outside.  And so, I turn to reading a selection of books loosely based on a theme. Starting last fall, I wanted to explore the relationship and responsibility that we in urban areas have to nurture the natural habitat around us.  Emma Marris, in Rambunctious Garden – Saving Nature in a Post-Wild World, had already introduced me to this idea.   In her book, Marris puts forth the idea that humans have always changed the natural environment and in our increasingly populated world there are few places that are untouched by human footprints.  She suggests that instead of trying to preserve or think about nature as a pristine state, we should embrace it where we find it, a global half-wild rambunctious garden.

As part of this trend, I started Second Nature A Gardener’s’ Education, by Michael Pollan, one of my favorite authors.  You might have read The Botany of Desire, The Omnivore’s Dilemma or any one of the numerous books he has written about our food system.  Second Nature, Pollan’s second book was published int 1991 almost a decade before the Botany of Desire and reading it filled in the gaps about why Pollan became interested in food, gardens, and man’s relationship with nature:  It was in his blood from early childhood.

In Second Nature, Michel Pollan chronicles his seven-year experience in establishing a garden on five acres of old worn-out land in Cornwall, Connecticut.  The experience taught him a lot about gardening but even more about developing a local sense of place in his surroundings and recognizing his place in nature.  What he found, as anyone who gardens can tell you, is that there is a lot more going on in a garden than you would expect and confronting even very small garden issues, (think garden pests, irrigation, or neighbor boundaries), forces one to find a personal ethic in larger issues and reinforces an understanding the power and fragility of nature.

The book unfolds through the seasons of the year.  But in each season, Pollan finds a way to ask the reader to consider their place in nature.  I particularly enjoyed a summer chapter entitled Weeds are Us. He starts by trying to start a wildflower meadow which in the end he finds out can only be maintained by “weeding”; just as we “weed” or maintain our pristine natural areas.   This idea gives credence to Wendell Berry’s “in human culture is the preservation of wildness”.  We can no longer do nothing.

In Fall, Pollan lays out his case for looking to the garden for the making of a new environmental ethic.  For Pollan “the garden is a place with long experience of questions having to do with man in nature.”   He summarizes ten characteristics based on a garden ethic.  I loved that his ethic would be based on local answers, start with what you are given, study nature to find answers and that we (humans) are part of the environment.  I, also, have learned these same lessons in my garden.

So, regardless of whether you are an experienced or a want to be gardener, check out the relationship between a garden, man, and nature with Michael Pollan.

1 thought on “Thoughts on Second Nature by Michael Pollan” At my home in the west Texas desert, I keep backyard chickens, harvest rainwater, compost, grow my own fruits and veggies, and harness power from the sun.  My home is also a refuge for local pollinators, butterflies, and birds as well as for my four dogs, two cats and myself.